From Cameroon to Brooklyn: One Student’s Journey

Did the fact that I spoke with a different accent counter the knowledge I was about to share?

Sophomore Serena Netti Ndjuissi Pawa was recently accepted into the University of Wisconsin-Madison College Access Program (CAP), a competitive, 3 week pre-college summer program. Serena is one of two students from  St. Joseph High School who were accepted into CAP this year. In this article, we share the essay Serena wrote about her educational experience upon immigrating to the United States in the 6th grade.

From Cameroon to Brooklyn: One Student’s Journey 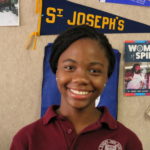 Cue laughter. As an immigrant from Cameroon, Africa in the sixth grade, I did not find that laughter amusing. I admit my pronunciation of the word heart did sound like I was saying hat. Did the fact that I spoke with a different accent counter the knowledge I was about to share? I realized at that moment that although one’s intelligence matters, being able to assimilate while learning may matter the most. So I made it a mission assimilate, a strategy that worked out well for me in middle school.

However, high school is a different ball game. People no longer care how well I speak; they appear to be more interested in my intelligence. This means if I understand a class lesson, we are officially friends. When I came to high school, I also began to see changes academically; I found that I love Mathematics and Chemistry because they engage me intellectually. I think these are my strengths. However, I sometimes have a concentration dilemma! I tend to focus intensively on one thing at a time. I either focus excessively academically or excessively socially.

I believe that, through its intensive summer program and trips, the University of Wisconsin-Madison College Access Program will help me create a balance between social skills and academic discipline. I will also have the chance to grow in my primary strength: the ability to acknowledge differences and accept people as they are. I can effectively convey my interests and knowledge while listening to theirs. These days, I can ask someone with confidence, “Did you know that a pig’s heart is one of the closest to the human heart?”, and be understood.