EAST ELMHURST, NY- Since making her commitment to Wagner in the fall it’s been a struggle for St. Joseph star guard Raven Pitt ’18 to 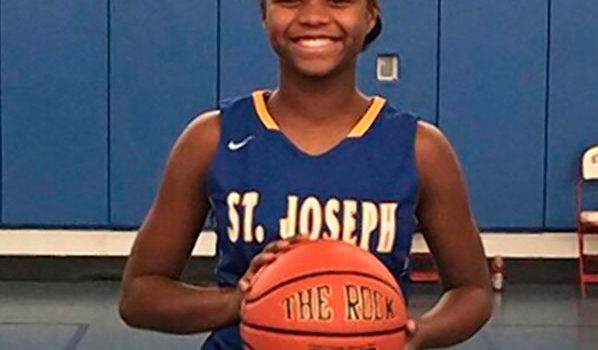 EAST ELMHURST, NY- Since making her commitment to Wagner in the fall it’s been a struggle for St. Joseph star guard Raven Pitt ’18 to play well in front of her future head coach Heather Jacobs.

That changed though on Monday afternoon in Queens as the Cougars took on a shorthanded Msgr. McClancy team who were without the services of Rhona McCaughey ’18 who was sidelined after suffered a concussion on Saturday.

With her St. Joseph team trailing at the half 23-16, Pitt would take matters into her own hands in the second half by scoring 14 points and rallying the Cougars to a key 46-38 CHSAA league win that puts them right back in the race for a Brooklyn/Queens league title.

Before the game started St. Joseph head coach Mike Toro went up to Pitt and gave her a heads up about the fact that Jacobs would be in the building watching her. He noted that many times when she has seen Jacobs in the crowd Pitt has frozen, so he said he gave her the best advice possible to let her know she can play her best in front of her future head coach.

“I said to her no matter what you have to remember you can play bad every game the rest of the season and you are still going to Wagner,” Toro explained.

He did that to take the pressure off Pitt knowing that while she can be anxious to play in front of her she needs to understand that they know how good she is and to just go out and play ball.

Early on though no one had it going for St. Joseph as the Lady Crusaders were dominating the offensive glass allowing Msgr. McClancy opportunities to get multiple possessions on their end of the floor which often let to good looks from long range against the Cougars zone.