Imperfect Love: A Reflection on Service 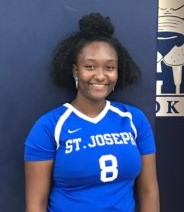 Over the past two months I learned that love is one of the most powerful things we manifest. God’s love is infinite and we have to share it. One way we can share this love is through service. We share God’s love, our personal love, and the love we get from our families and communities with other people around us. This quarter I decided I wanted to help someone in a deeper way than I have in the past. I didn’t want to just get my service hours in; I wanted to make a difference. Therefore, when my religion teacher, Ms. Tomassi, told us about the opportunity to go to a soup kitchen, I immediately signed up. I see homeless and poor people everyday and it hurts me when I can’t do something to help them, when I can’t change them and make them “better.” However, this service experience opened not only my eyes, but also my heart. Service isn’t about fixing other people or their problems. It’s about loving them through their struggles and being one with them through their suffering.

I went into the soup kitchen thinking that I would make a difference in the lives of poor people. However, I actually made a difference in mine. When I signed up to help at the soup kitchen, I thought I would be going to a shelter where I would help wash dishes or serve the food to the poor. However, I walked into a convent and was welcomed by very friendly nuns. After I was greeted I was told that I had to turn my phone off and keep it off me. This was strange to me at first because I didn’t understand the reason I had to leave my phone behind. Then the nun explained to me that they don’t have phones and the helpers don’t keep their phones on them because they try to give their guests all their attention and live in the moment. Also, they want to share their love by suffering together with the poor. After the nun explained this to me, I was instructed to place all my belongings in an open room. I was very alert by this. I had this mentality that the other helpers and the nuns wouldn’t try to steal my belongings, but maybe one of the poor people might try to. I hate that I felt that way, but that’s the first thing which came to mind. I slowly placed my belongings in the room and went to the nuns’ eating area.

While I helped make cheese sandwiches that would be given out on weekdays, I noticed that everyone looked so happy to be making the food working together. After we did about ninety sandwiches we were told that it was time to get ready to serve lunch. I thought we were going to a different room, but I was shocked to find out that the nuns’ eating area was also the eating space for the guests of the soup kitchen. I unconsciously had this ideal that homeless and poor people could not have the same comforts as me. To see that the poor were welcomed into the nuns’ home and given the same comforts was life changing. I realized all my biases and it hurt me to think the way I did. I realized that I didn’t look at homeless and poor people the same way I looked at my friends. I saw them as unclean and inferior; not as regular people.

I was told that I had to serve bread to the people. I was very excited to see them, to be honest. When they came in I quickly went to each one of them to serve them. For once I was putting myself not only on the same level as them, but I was placing myself below them. They told me what they wanted and I served to their needs. In that moment, when I spoke to them and saw the smiles on their faces as I gave them their food, I realized that they are just as human as I am. In fact, there was a young girl and boy who looked only two years older than me. They had on Jordans and had better phones than I did. This showed me that just because they are going through different struggles does not mean they are any less than I am.

However, that epiphany was quickly lost when we were done serving. After the guests left we cleaned up a little and then began preparations to eat. I saw that the regular helpers were placing spoons and forks and paper plates on the same tables the poor ate at. I knew that the nuns and the poor ate at the same place, but I didn’t know I had to eat in the same place as they had eaten. Once again, my unconscious bias came to play. I was very hesitant about sitting on the same chair in which a homeless person just sat. However, I realized that I was not only being selfish but I was also being a hypocrite. How can I say I want to make a difference in the lives of the poor when I can’t accept and love them for who they are now? How can I say that I helped the poor when in the back of my mind I saw them as dirty and not worthy to even touch what I touch? I also saw myself as a hypocrite in that moment because I realized that homeless people sit in trains and touch the poles just like I do. However, all this time I unconsciously believed that if I didn’t know that a homeless person sat a certain place or touched a certain spot on the pole I would be fine. If I knew where they sat or where they touched, I made sure not to go near there. This broke my heart because I was part of the problem. I was one of those people that only did good just for doing it. I went in with the mentality that I was going to make a difference, but as I sat at that table and ate the same food the poor ate, I realized that my love had many flaws.

I reflected on myself and realized that I tend to love someone until I find out their flaws. That isn’t true love. I know this because to me true love is caring for and loving someone with all their imperfections and loving them through all their suffering. True love is suffering with them for the greater good. This service helped me see that I don’t know how to fully express my overflowing love yet. A servant of God, Dorothy Day, once said, “The mystery of the poor is this: That they are Jesus, and what you do for them you do for Him. It is the only way we have of knowing and believing in our love. The mystery of poverty is that by sharing in it, making ourselves poor in giving to others, we increase our knowledge of and belief in love.” I really resonate with this because my belief in love and its power has changed. People love me with all my flaws, so I should be able to love them with theirs, no matter how bad their suffering might be. I also resonate with this quote because I consciously noticed that I don’t fully understand how to share love.

I go through so many friendships and relationships, and one way or another I find myself telling that person, “I can’t do this whole feelings thing.” I tell them stop making the relationship complicated, but in reality I was the problem. I don’t know how to express my feelings because I haven’t fully understood what it means to love. I know that Love has looked at me and I know my family loves me. I know that I love my friends and family. However, I don’t know how to share that love. This service with the poor opened my heart and showed me that I need to look past the physical appearance and flaws. It showed me that I need to look at people’s hearts and their suffering. I need to look at my own heart and my own suffering, and not fix myself, but grow in love.

This service also taught me that society needs to be more open minded when it comes to love. We are so blinded by money, drugs, and other material things that we lose touch of what connects us all. We lose touch of the love. As a society we need to stop doing good acts for show and do them because we actually care. Homeless and poor people might not have the material things we have, but they have one important thing we all yearn for. They have love. They have more love and appreciation for the person who gives them a dollar than for the dollar itself.

I want to keep serving the poor because I feel like I have been called in love to do so. I choose to return love and grow in love. I choose to learn how to share and better understand what love really means. This service to me was incomplete, but I know that other opportunities to love will help my love grow deeper.

A Radical Life of Loving Service

Maria and two other Juniors visited the Father Solanus soup kitchen, which is run by the Franciscan Sisters of the Renewal, a young religious community founded in 1988 in the Bronx. They were founded as a sister order to the Franciscan Friars of the Renewal, which began in 1987. Since their founding, both communities have grown to open numerous houses in the New York City area and beyond. Taking the traditional vows of Poverty, Chastity and Obedience, the sisters and friars live a radical life of service following the example of St. Francis of Assisi. In particular they focus on serving the poor, homeless, and the youth. Below you can take a look at a photo gallery of some of the work of the sisters in their communities in NYC. 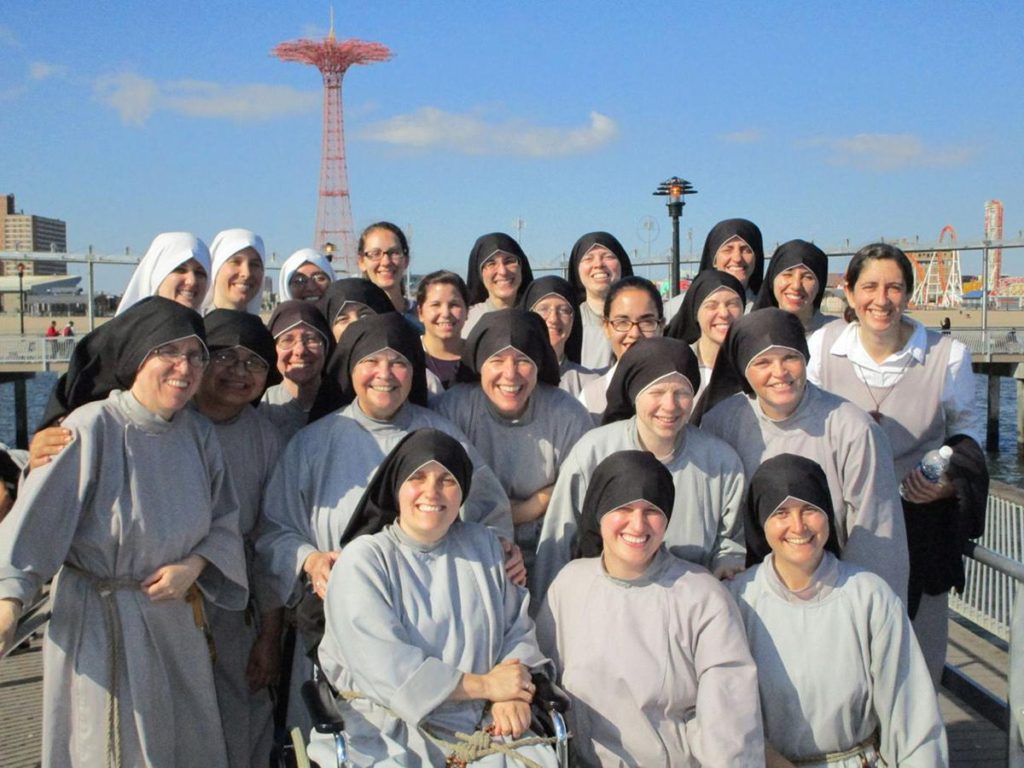 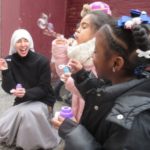 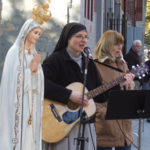 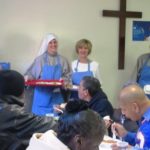 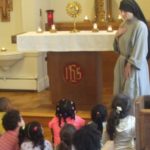 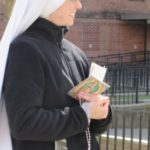 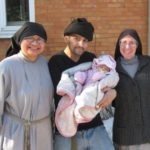 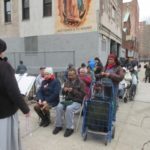 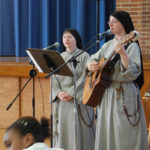 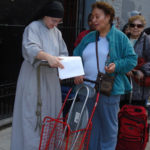 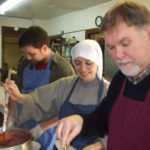 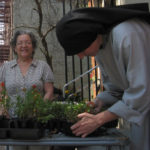 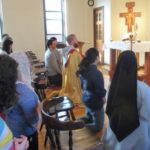