What Opportunity Can Do

For Karielys Ortiz, one of the first two Opportunity Network fellows to be selected from St. Joseph High School, future aspirations include a medical career, ideally as a surgeon. She was initially inspired by her mother’s negative experiences with uncaring surgeons, and wants to improve the profession. Originally exposed to such a possibility through joining the Medical Club at school, where members learn basic surgical procedures under the guidance of science teacher Mr. Derek Martin, the path forward to an academic and professional career in the field opened up when she was chosen from among hundreds of applicants city-wide for the competitive six year fellowship.

Xiara Richmond, also a OppNet Fellow, is excited to find out whether she will be traveling this upcoming summer for study abroad to India or Japan. While India was her top choice originally due to a medical program being offered, at the moment she is hoping for Japan because of her long-standing fascination with Japanese culture and history. Her ambitions include working in the psychology field – though whether as a practitioner or a researcher she is not yet sure. Having seen people she knows struggle with mental illness, she is deeply curious about how the mind works, and where such illnesses stem from, and she hopes to spend her college and professional years going deeper into these questions. 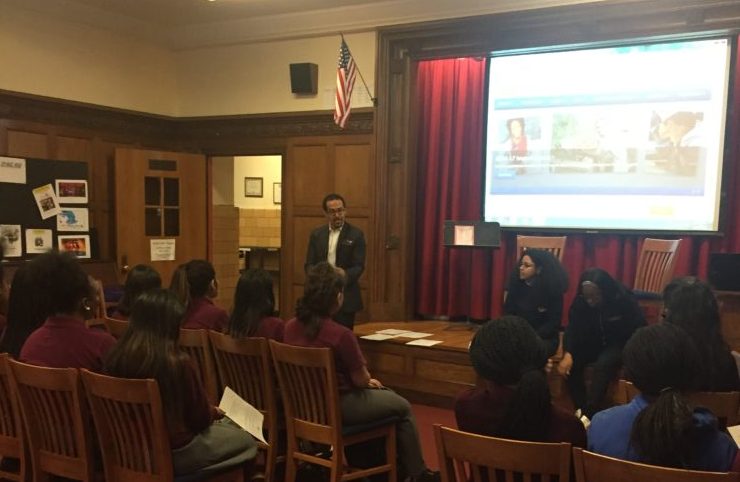 What is The Opportunity Network?

The Opportunity Network was created in 2003 with a novel concept; while many schools and organizations in underprivileged communities seek to provide a path toward a fulfilling educational and professional future to young students, few if any address all four tiers of the OppNet Career Fluency® model: 1) acquisition of a college degree, 2) career awareness and exposure, 3) professional etiquette, and 4) establishing networks and social capital.

Most unique to OppNet is the focus on networks and social capital, which emerged from founders Brian Weinstein and Jessica Pliska’s realization that, while academic achievement on its own is wonderful, most people find their jobs through people they know. This kind of social capital, which can be the most important element of leverage in a professional career, is often taken for granted. But it is in fact tied to skills and exposure that, in not learned at home or within one’s community, often are never acquired, leading to severe underemployment even among highly educated students. 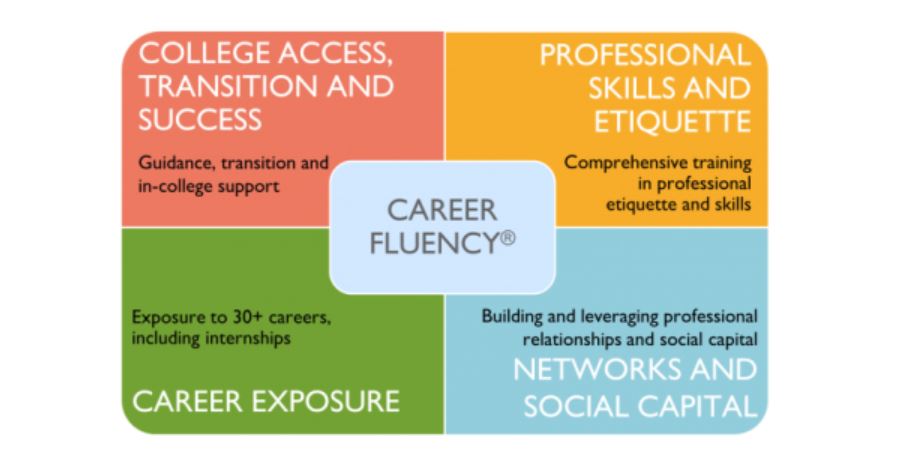 Students selected as Fellows follow a six-year path, from the summer before Junior year of high school until the fourth year of college, wherein they complete annual, paid summer internships, attend fully funded study abroad programs such as the one that Xiara will participate in this year, visit dozens of colleges and universities, and gain exposure to numerous possible career paths. Along the way, they attend weekly after-school workshops that cover topics ranging from learning how to dress professionally in the workplace, to time management, to developing the conversational skills necessary to enter into and sustain on-going networks of support and connection to a wider world of personal and professional possibilities. 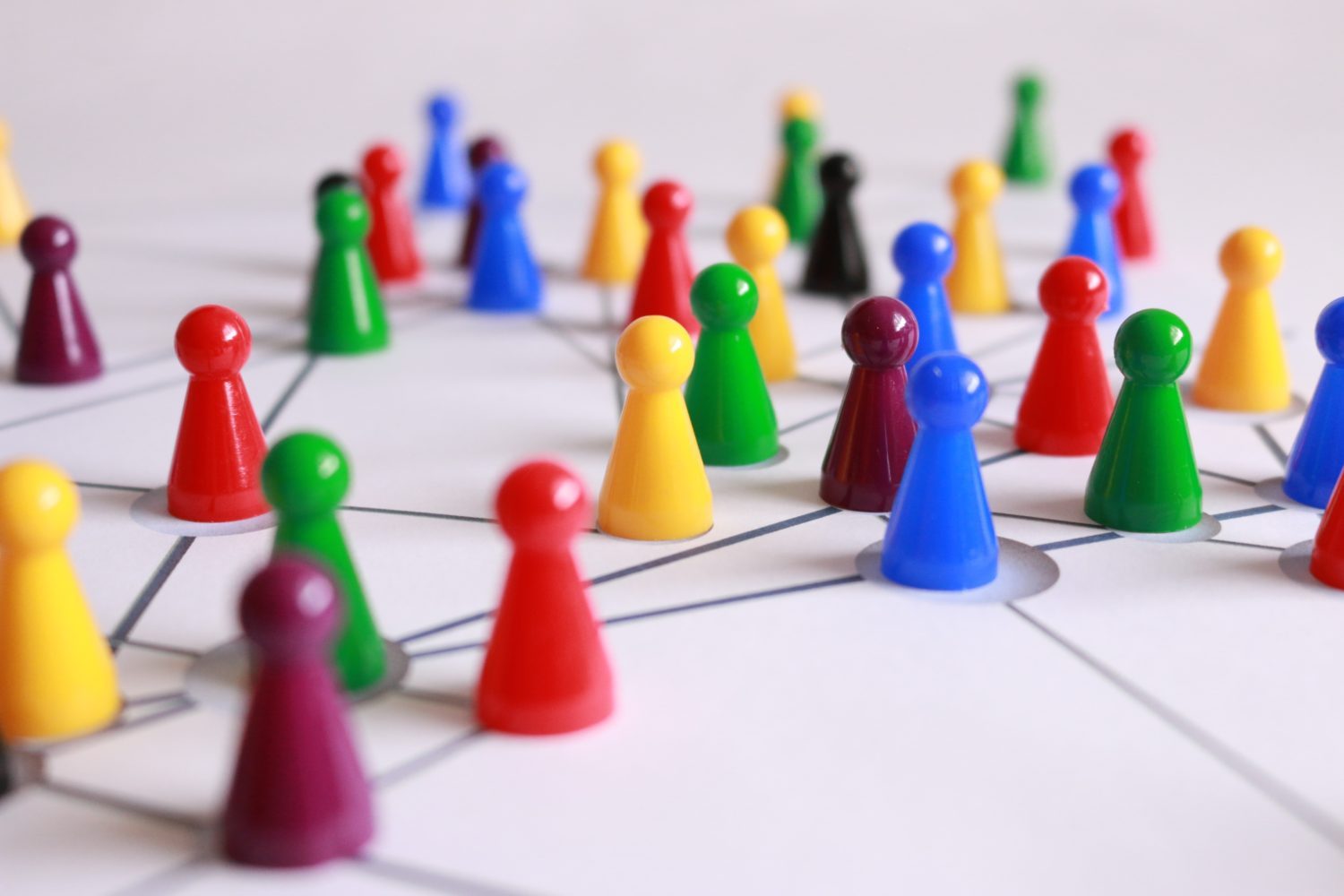 Both Xiara and Karielys were impressed by the OppNet application process. While prior academic achievement is an important consideration (successful applicants are expected to have an average of 87% or higher), there is a clear focus on the whole person. In fact, both students were surprised to find that their applications were chosen over those of some students with higher grades. The question Karielys chose to answer for the application essay asked her to describe one of her character traits and how it has shaped her as a person; she decided to write a narrative about her experience of resilience, using a metaphor about the shattering of windows and the possibility of repair. From the perspective of both students, OppNet looks for an emerging self-awareness and maturity in their Fellows; “You have to connect deeply with your inner self,” Xiara explains.

This year, several more students from St. Joseph High School will be applying to OppNet, and whether they get accepted or not, Guidance Counselor Ms. Brianne Hickey thinks the application process itself is well worth the effort on its own. It is a challenging personal journey that requires serious personal reflection, and a willingness to take healthy risks. In addition, as many business professionals and scholars have learned, and as Ms. Hickey teachers her students, the experience of failure is in itself a core part of the journey to success; it helps us to understand that we are not fully defined by our accomplishments, and it presses us to look for areas where we can work to improve ourselves, generating resilience and greater self-awareness.

So far, in the first year of the fellowship, Xiara and Karielys have found the experience very fulfilling and helpful, academically but also more broadly as well. “There is a big emphasis on figuring out who we are and what we want, as opposed to simply following expectations that have been placed on us by others,” Karielys explains. Because the program draws students from all five boroughs of the city, they have both had the chance to make a diverse array of friends whom they otherwise would not have been exposed to, and have deeply appreciated the open, welcoming and non-judgmental atmosphere of the program. They have also learned to see their own flourishing as about far more than just getting high grades; “it’s about your character” Xiara explains.

Are you an SJHS student interested in becoming an OppNet Fellow? Contact Ms. Brianne Hickey, and visit How To Apply on the OppNet website for more information.